This quilt was designed by my seven year old daughter.  She just assumes that whatever she dreams up I can do (insert super hero costume here).  The very first bit of piecing was a Curved Seam.  I've had very poor success with curved seams so to keep my sanity with this one, I cut the curve from the blue, ironed it under a ¼ inch and used a decorative stitch to sew it to the green.  Then I trimmed away extra green from the seam allowance under the blue.  It worked for me, but I doubt that's how they teach it :) We used a graphics program to draw the bear then print it, cut it out and piece it back together.  The paper pieces served as our templates.

Note to self:  My background brown was not a whole lot larger than the lighter brown going on top of it - sometimes my satin stitches on the top and bottom layers overlapped.  Either design the background bigger or the foreground smaller.

I didn't use a iron-on bond product for the larger pieces when I attached them to the background, but I did use interfacing - for the most part that went really well.  The smaller things such as eyes were glued on before they were stitched. 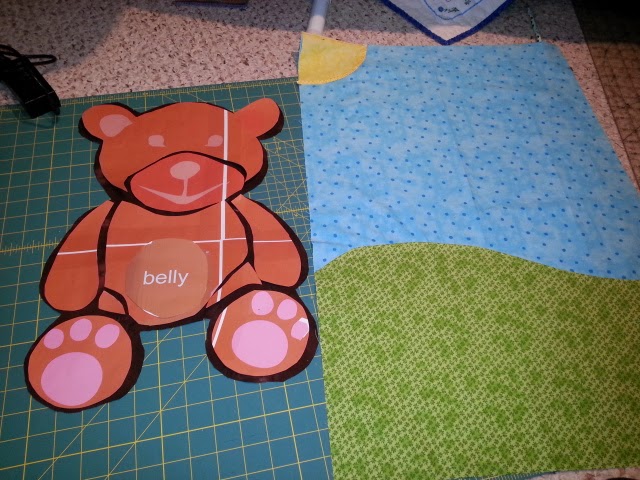 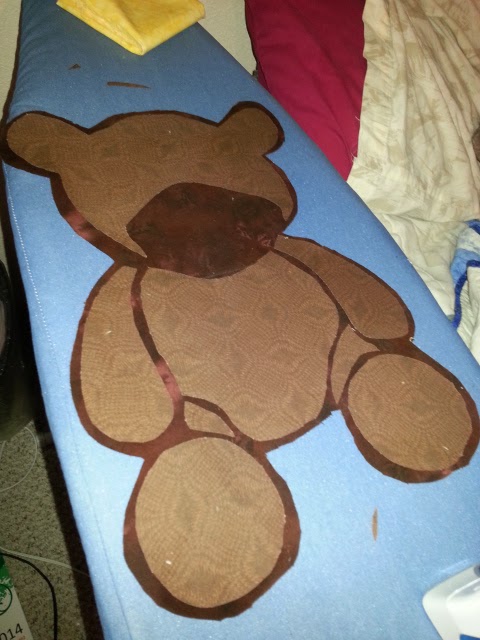 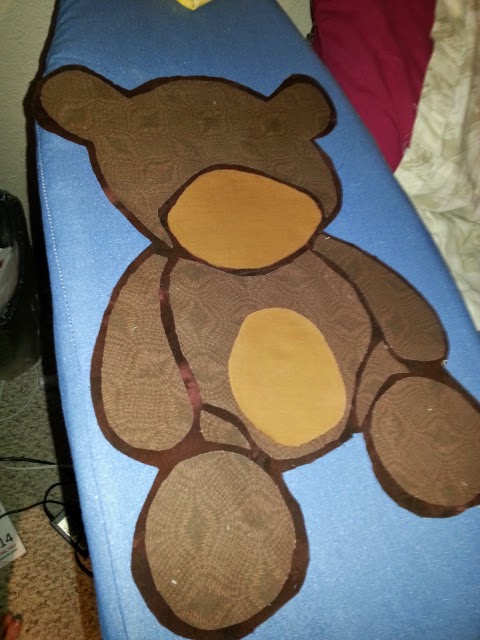 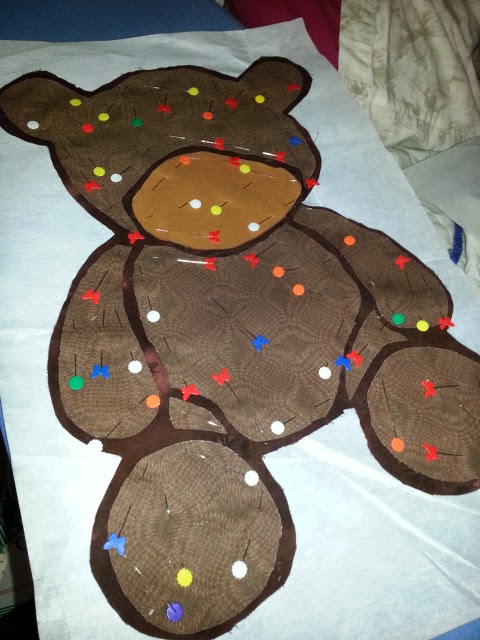 Another note to self:  Cut background to size AFTER the applique has been sewn on. 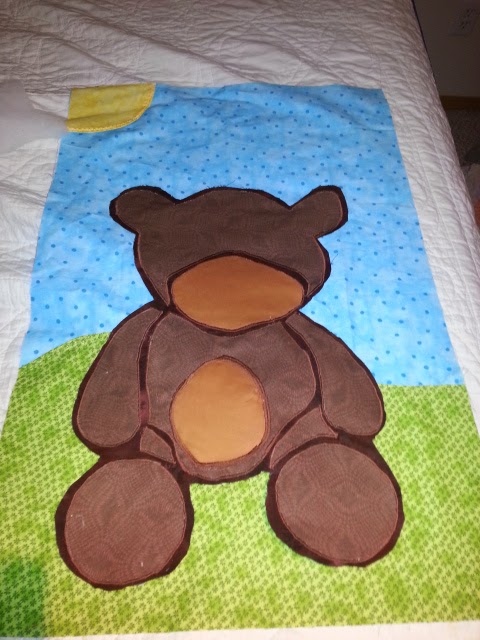 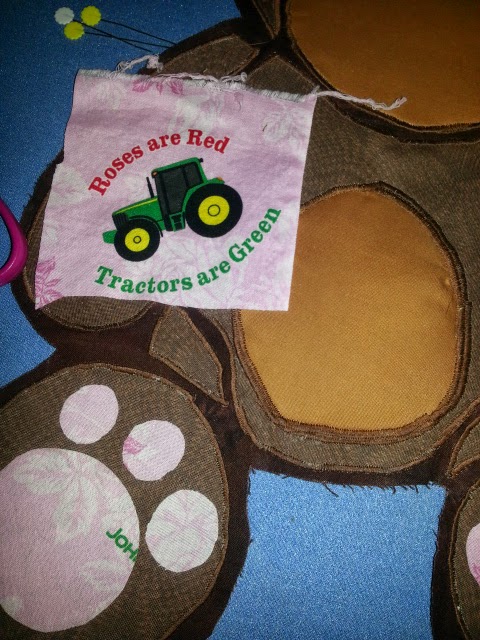 My daughter also picked all the fabrics and all the thread.  The red inner border was the last thing she picked.  I think it's fantastic.

The Small One also had me do trapunto.  She doesn't even know what that is, but the bear and the clouds have extra layers of fill - the belly has an extra layer again.  I used YouTube videos to teach me the ins and outs. 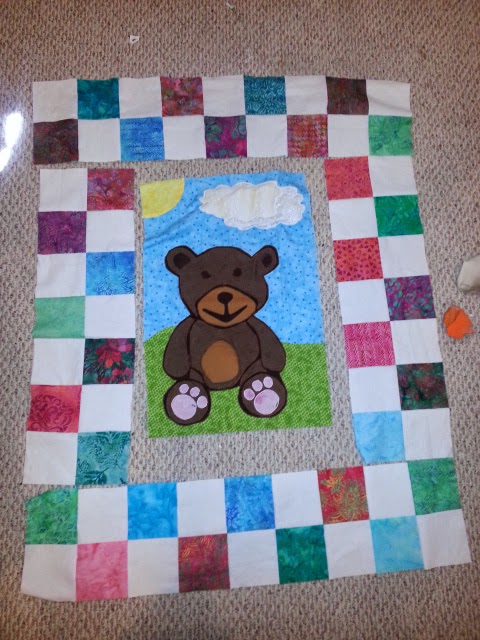 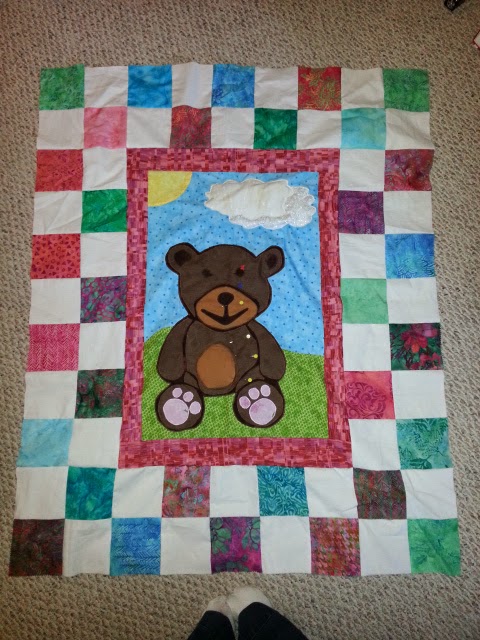 The whole reason for this quilt was the tie - here it is - the last piece of the puzzle.  Her cousin is due in September.  I hope s/he enjoys the teddy bear. 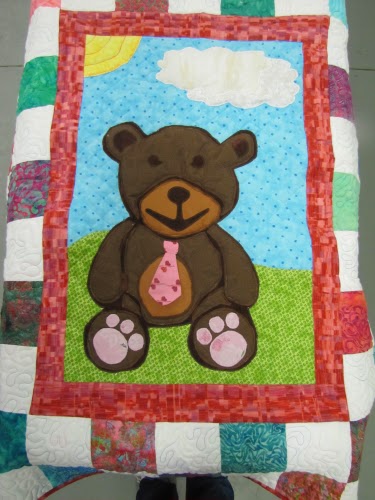 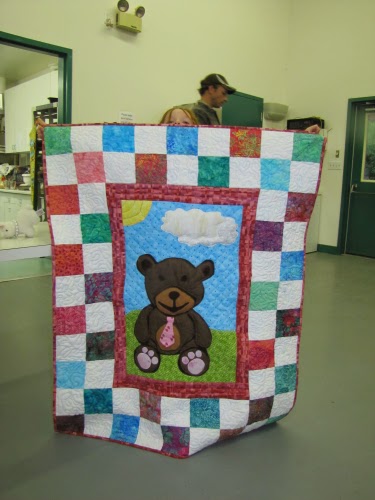 Fabrics / Best Buys:  All these fabrics were from my stash.  The four patches were made from a Hoffman Bali Snap that I was given for Christmas.
Posted by Lisa at 5:38 PM

I Link to These Blogs